Get social with us!
Home / Projects / StreetSounds 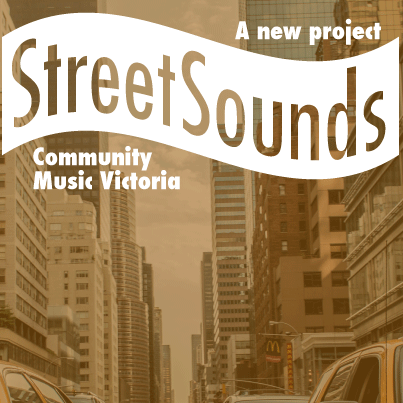 Riffs and rhythm. Squeaks, shouts and smiles. Tunes blast out. The band moves as one (almost!) as they lead the parade. Or play on the street corner. Or as they rehearse together on a rainy Tuesday night in their local community hall. You know the feeling. Playing in a band, singing and making music with others is something special. Hearing the rhythm drift down the street always increases your heartbeat. And playing at a street band festival is simply thrilling!

What is it all about?

What happened at the street band festival?

How was I able to get involved?

StreetSounds is a project which has resulted in new bands of all flavours starting up and flourishing throughout the State.  All the bands are open to anyone who wants to have a go, whatever stage they are at with their instrument. Playing an instrument with others is much more fun than playing it alone at home - that's what it's all about.  Here's some of the new bands so far:

Prahran Acordian Band: Playing German and other European folk tunes, including Australian tunes arranged for multi parts. Playing accordion alongside others allows everyone to concentrate on phrasing the line they're playing so it sounds completely different from a single instrument - much more musical!  the band meets on the 1st and 3rd Thursdays of each month. Click on the link for more details.

The Sunshine Street Band: The Sunshine Street Band meets fortnightly at Albion Community House for two hours on a Tuesday. The band is open to players of all skill levels and ability. So whether you've played for years or have never played a note and you'd like to join come along...and bring your friends, it's a community band and EVERYONE is welcome. Bring your instrument if you have one, there may be a few instruments available to borrow on a short term basis, too.

Kyenton Street Band: The Kyneton Street Band meets on Tuesday evenings in the Kyneton Scout Hall at 7pm in sessional blocks. Join this community band and you can learn how to build portable marimbas for the band, too! Repertoire includes some African music, Latin, a bit of Eastern European, with maybe a pop tune or two, and the band play frequently at local events and community markets. Cost: $15 per session or $50 for five weeks. ​

FAME: Footscray Acoustic Music Ensemble: Join this fortnightly two hour class, led by Luke Plumb, that fills the gap between a jam session and a formal music lesson. Participants of all levels will be able to join in learning new music from around the world by ear. You will help hone your skills of playing both within a section of like instruments, and as part of a larger group. There are no prerequisites other than no amplification and a general understanding of mutual respect amongst the class. Repertoire selections will include instrumental music from Scandinavia, North, Central and Southern Americas, Western Europe, Eastern Mediterranean and Persian traditions.

Invy Horn Jam: Invy Horn Jam, is an occasional street band of mainly horn players (brass and saxophones), playing and learning tunes by ear with improvisation. Based in Inverloch, there are no audtions and the band is open to everyone interested in playing! Click the link to find out how to get involved.

SCOTSO (Surf Coast Old Time Street Orchestra): An 'old time street orchestra' in the Surf Coast area with the aim of getting people together to play for fun, learn some American and Celtic folk tunes, (and possibly some Swing or other genres of tunes..) and maybe at some stage to do some performances in our local communities. Open to players of all instrumentation along the lines of fiddle, mandolin, guitar, banjo, cello, ukulele, whistles or flutes and more (all musicians welcome) The aim is to create a supportive space where everyone feels welcome to 'have a go' at being part of a band. Every note, and every squawk adds depth to our overall sound. No need to read music; ear learners are very welcome!

The Fabulous Mel-Tones – is open to all comers, all instruments, all ages. John Lane and Lyndal Chambers are working with this new group who meet at the Melton South Community Centre. So far they have percussion, horns, ukes an accordion and voices! After only one practice they were already lined up for a gig which took place at the Melton Railway Station on June 6! See the video below. They also have the ‘Dream Big Festival’ in their sights, which will take place at the Mt. Carbury Reserve, Melton South on September 9.

Boomulele: Boomulele is street band based in the Latrobe Valley consisting of percussionists and ukulele players who are keen to learn and play simple grooves from memory while parading along. And the best bit is EVERYONE IS WELCOME! See a film of the band in action and participants talking about what it means to them​, in the clip below.